I know what you’re thinking…Pikes Peak isn’t a hidden secret of Colorado. It can be seen from most places here in Colorado Springs. Totally not hidden, but did you know there have been BIG FOOT sightings on Pikes Peak?!

Buckle up. It’s about to get weird up in here! Big shout out to Summer Justice for this cool fact…

About 215 years ago today (11/15) explorer Zebulon Pike laid eyes on the Colorado Mountains. Pikes Peak was named after him!  It’s one of the Top 25 mountain peaks of the Rockies, at an elevation of 14,115 feet. How cool!

At that elevation though, a big, hairy monster has been spotted! If you drive up to Pikes Peak, you might see the “Big Foot Xing” sign. If you’re interested in these Big Foot sightings, click the “Cool Colorado” pic below! – Aubrey 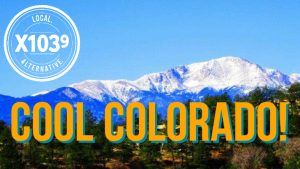 Sign up below for your chance to win tickets to check out Third Eye Blind Saturday April 8 at the Pikes Peak Center!

FOX21 defeats X1039 in Media Brawl at WhirlyBall, a benefit for Inside Out Youth Services